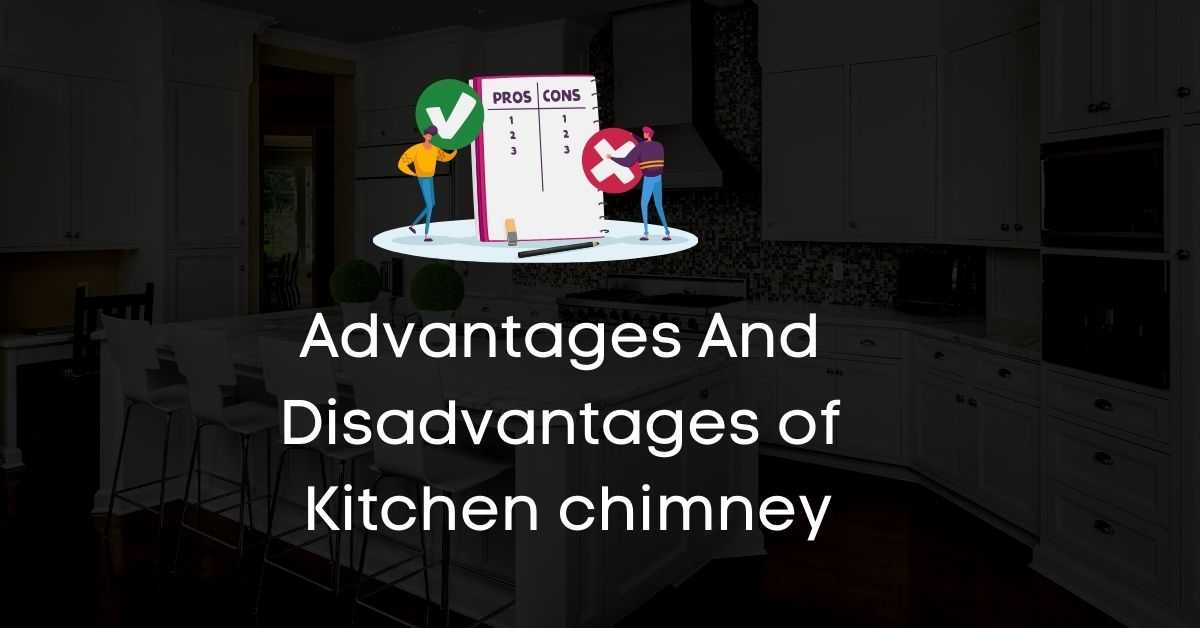 A kitchen chimney is an important part of a home. It is used to ventilate the kitchen and get rid of smoke and steam. There are many different types of kitchen chimneys on the market, and it can be difficult to choose the right one for your home.

Advantages And Disadvantages Of Kitchen Chimney

A kitchen chimney can provide many advantages for homeowners. These include:

Clean air: A kitchen chimney removes smoke and odors from the home, which is especially important in a kitchen where cooking and baking are common activities.

Reduced energy bills: A well-functioning kitchen chimney can reduce your home’s energy consumption by up to 30%. This is because smoke and gas from appliances burning in the kitchen escape through the chimney and are not re-circulated inside the home.

Improved efficiency: A kitchen chimney can help improve the efficiency of your stove and oven by allowing more heat to reach the food.

So is a chimney good for the kitchen?

Though we have more advantages of kitchen chimney than its drawbacks let’s find out in this post.

Assume that you don’t have a chimney in your kitchen! You have to try hard to get dropped off the specks on the kitchen walls. And it is caused by smoke and fumes that come out while cooking and stick to the kitchen walls.

While, within a few weeks, both smoke and fumes darken your kitchen walls and ceiling, so they look dirty and greasy. But you don’t need to feel stressed because you have a kitchen chimney with you as a cleaning aid. It holds the feature of powerful suction capacity that ends in clean and dirt-free kitchen walls.

how to clean a kitchen chimney

Ensure the security of kitchen tiles

Because Indians are die-hard fans of fried, spicy, and delicious food that is a combination of many oils, various spices, and condiments. This process is followed by smoke and fumes that make the kitchen tiles greasy and adhesive.

The chimney in the kitchen sucks all the oil and smoke, and as a result, your kitchen tiles and cabin are safe and secure.

The other reason you use a chimney is that it will eliminate all the smoke from the kitchen. Smoke can load the kitchen when you are preparing parathas or when you are roasting or frying meat on a gas stove. The chimney will easily remove all of these things.

Keep the odor away from your kitchen

The kitchen chimney has a remarkable potential for strong suction. It ensures the elimination of all outcast and faulty odors while cooking.

All you need to do is push a button to switch your chimney. You can even adjust its suction range slowly, medium or fast to suit your needs. It keeps your home free from any rotten smell and makes the home and kitchen healthy and comfortable.

Best suit for the healthy atmosphere

Kitchen-based air contamination is a significant concern related to the health of your loved ones. When you release cooking fumes which are a composite of many gases that can result in prolonged respiratory enigmas.

But the kitchen chimney keeps checking the air pollution and airflow and maintains its standard. It ensures healthy cooking and enjoyable eating.

Sometimes smoking or the strong smell of what you are cooking floats in your kitchen and ruins your cooking time. Seldom becomes the reason for your watery eyes or sneezing. The kitchen chimney is one such device that leaves your cooking experience problem-free and joyful.

The kitchen chimney is an artistic extension of your kitchen. It does not entail an extra area for insertion as it has to fit on the stovetop. Its classy, customized, and svelte design endows your kitchen with a more stylish look.

Every advantageous thing also has some drawbacks. Kitchen chimneys also have some disadvantages. Let’s have a look at these cons incorporated with kitchen chimneys.

Disadvantages of kitchen chimney in kitchen

1. Chimney can be a fire hazard.

2. Chimney can be difficult to clean.

3. Chimney can be expensive to install.

5. Can be dangerous if it collapses

Disadvantages of the chimney in kitchen

Though the chimney is one of the innovative appliances used in the kitchen, you have to spend a significant amount on it, which you may afford. It does not end there, but you have to take care of its maintenance.

Everyone buys a chimney for a pre-built kitchen. Therefore, consumers are recumbent to installation and fitting to their kitchen decor. Moreover, it can be a costly and painful affair. Furthermore, if you have an open kitchen, you require a particular place to fix it because it can be fitted on the gas stove to suck all the toxic stuff.

The kitchen chimney eliminates grease, fumes, and odors from cooking. Also, it makes the chimney window filthy and adhesive. You may put a lot of effort to clean it up. Also, it is a bit difficult to clean the filter area for this purpose you have to call a specialist.

To suck all the oil and other substances! There is a suction feature incorporated with these chimneys, which creates noise. This loud and irritating noise may cause you headaches and a worse cooking experience.

When you increase the suction power, the noise also increases, which is not tolerable for anyone. So, this element diminishes the propensity of consumers to own.

Kitchen chimneys have an artistic charm. You have to spend extra money on the maintenance that is necessary to keep your chimney in the best working condition. Also, You might need to call an expert to repair and restore it.

Section 3: How to Choose the Right Kitchen Chimney?

It is not an easy phase to choose the best one from many options. And, of course, you will find more options to choose the best chimney on your budget. As we know, many famous brands have launched their products with many features.

But it does confuse buyers with the choice of chimneys. Because each product has unique features that vary in price, this disadvantage sometimes forces the user to give up the idea of ​​having a chimney.

Disadvantages of an auto clean chimney

Pros and cons of the chimney in the kitchen

Cons of a chimney in the kitchen

Chimney in the kitchen

A kitchen chimney fitting in a window can provide extra ventilation and heat in the kitchen. However, the chimney can be a nuisance to clean and may block sunlight from entering the room.
1. Chimney cap 2. Inserts 3. Hangers 4. Latch

Advantages of a kitchen chimney:

Is a chimney necessary in the kitchen?

Is chimney good for Indian kitchen?

Yes, a chimney can be a good addition to an Indian kitchen. Chimneys are good for kitchens in many ways. They provide a way to vent the smoke and heat from the kitchen, which can help to keep the space cooler. They also help to distribute heat more evenly, so that cooking can happen more quickly and without hot spots.

Which type of chimney is best for the kitchen?

There is no definitive answer when it comes to which type of chimney is best for the kitchen. However, some factors to consider include the material the chimney is made from, the size of the chimney, and whether or not it has been previously used in a similar kitchen setting.

A kitchen chimney is a pipe that runs up through the roof of a kitchen and allows smoke from the cookstove to escape. They’re normal in newer homes, but maybe an issue in older ones where the roof may not be able to support the weight of a chimney.

Yes, the kitchen chimney is useful. It helps to circulate air in the kitchen, and it can also help to reduce the amount of smoke and carbon monoxide that comes from the stovetop and oven.