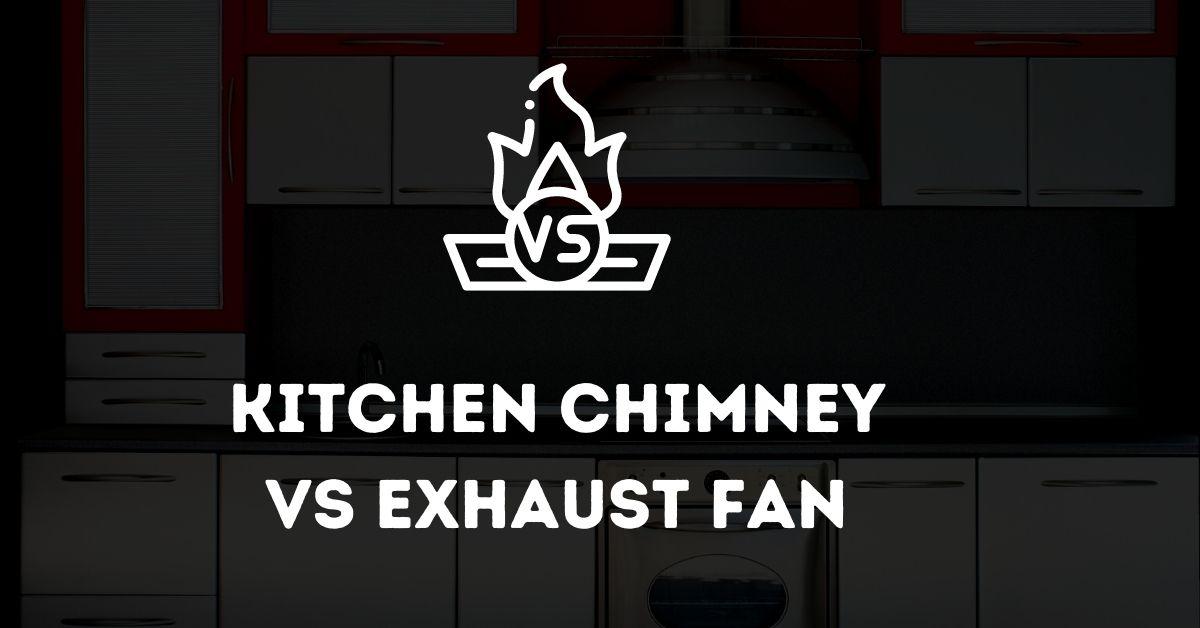 Howdy friends hope you all are safe and secure, okay let’s come on to today’s topic. In this post, we will cover kitchen chimney vs exhaust fan, which one is used in which condition plus which one should buy.

If we examine our house closely, we can deduce that dining and kitchen are the most important part of the house. Both areas enhance the beauty of the house.

What happens is, people, focus on the design and architecture of dining so that it will be charming enough, that will impress all the guests. But they forget about their kitchen, its design, and the architecture.

That’s true, that dining is the most important area in the house, but we can’t deny that kitchen is equally important.

Kitchen Chimney vs Exhaust Fan Which One Is Better

The kitchen is the reflection of your house and is the most visited area during any get-together, kitty party, etc. Also, the lady of your house has to be in a kitchen 24/7/365 days, to make food for family members.

So, it is your duty as the man of the house, to provide the ladies with a comfortable yet enchanting environment so that they can work without any stress. Now you must be thinking how is it possible? Well, you don’t have to stress over it, as we are here for you.

The best way to do that is to invest in your kitchen as much as you can, so that it will look stunning, casting a spell over everyone who sees it. Also, you have to choose a thing for the kitchen, that will not enhance its beauty but will also be a problem solver.

As one of the foremost problems faced in the kitchen is the increased amount of smoke. You can easily solve this problem, by either opting for an exhaust fan or a kitchen chimney.

Now you must be thinking, what is the best thing to opt for. Well, as always you don’t have to worry about this too, as we got your back.

We will guide you about the pros and cons of both of the equipment so that you choose the best out of it for your kitchen. So, buckle up, as we are about to witness the tough competition i-e Kitchen chimney vs exhaust fan.

Exhaust fan is like the tradition, that’s been followed for centuries when designing a kitchen. The exhaust fan looks just like the ceiling fans used in a room. The difference lies in the function, the exhaust fan absorbs the air from the room in which it is situated and then pushes it out of that room.

How Does Exhaust Fan Work?

Now the question that arises is, how the exhaust fan works? Well, the best exhaust fan for the kitchen has three components, an electric motor, blade setup, and frame. Usually, there are three blades on the fan, that move when the exhaust fan is switched on.

A kitchen chimney is also an electronic device, that absorbs the smoke from the kitchen and eliminates it from the kitchen. In addition to smoke, it can absorb all the oil, grease particles, microbes.

How does Kitchen Chimney Works?

Kitchen Chimney has three components i-e suction power, duct, and filter. The motor and the filter of the chimney are set up in the duct. The motor basically rotates, absorbing all of the harmful particles from the surroundings, and making the air of the kitchen clean.

On the other hand, an exhaust fan is just a simple ceiling fan, so it does not add those aesthetics into the kitchen.

Comparison between Elica vs Faber vs Hindware

The kitchen chimney is designed in a way that it removes all the bacteria, microbes from the kitchen so that your kitchen is free of all the harmful substances and you can have a serene yet relaxing environment for staying in the kitchen.

Exhaust fan when switched on, makes a lot of noise, disturbing the peace and serenity of your kitchen environment, while on the other hand, kitchen chimney is a silent product. When in use, it does not make any noise and your peace is maintained.

A wall-mounted chimney is fixed on the divider simply over the oven as in this picture. It gives a cutting-edge look to the kitchen; the hood is accessible in a pyramidal shape or a smooth straight-line plan.

An island chimney is explicitly for a kitchen with a cooking island. In such kitchens, the cooking stage and hob are away from the dividers and put in the focal point of the kitchen and the channels are concealed inside a false roof.

The filtered kitchen chimney is further subdivided into three categories i-e, carbon filter, cassette filter, and baffle filter. Depending on their function and use, the three filters, filter the smoke and the other particles in different ways.

Impact on other electronic appliances and the interior of the kitchen:

When talking about the kitchen chimneys, you need to realize that they can get the grime far from your kitchen. As such, they won’t permit the substances to make the apparatuses look messy and dull.

These exhaust fans can’t do as such, and that is the reason you should go with the kitchen Chimneys. With the assistance of a Kitchen Chimney, you can keep the machines Spotless and make the roofs and dividers ash-free.

Notwithstanding, on the off chance that you keep up both the exhaust fans and kitchen fireplace is no doubt, you can utilize them for an extensive period. This turns out to be one more significant thing that you need to think about the kitchen chimneys and exhaust fans.

Yes, you read it right, kitchen chimneys and exhaust fans have a great role to play when it comes to the cleaning of the kitchen. Want to know how?

While on the other hand, with having an exhaust fan, you have to clean your kitchen more often and that too with a lot of effort because exhaust fans cannot stop the oil and grease particles from ruining your tiles.

When it comes to the consumption of electricity, here comes another disadvantage of the chimney in the kitchen. Kitchen chimneys consume a lot of electricity.

Last but not least, instead one of the most important differences lies in the functionality of exhaust fans and kitchen chimneys. It has been estimated that it takes five exhaust fans to perform a function that one ducted chimney performs.

To avoid the harmful gas from re-entering the kitchen, your kitchen should not be compact and should have proper ventilation.

The proper ventilation near the area where the kitchen chimney is situated will help in stabilizing the pressure and will avoid such accidents while there is no such condition in the case of the best exhaust fan for the kitchen.

Exhaust fans are situated on the top of walls, and there is no such threat that poisonous gas will re-enter without proper ventilation.

To wrap up the cold war, i-e kitchen chimney vs exhaust fan, I will say that now you are aware of the functionalities, the pros, and cons of both chimney and exhaust fan.

So, if you are facing budget issues, then go with exhaust fans, they will also work in absorbing the smoke from your kitchen area and pushes it out of your kitchen, making your kitchen fresh and odorless.